The Charlie Awards are the highest honor given by the American Humor Studies Association  and are given for lifetime achievement in service to the AHSA and research in American humor.

He became an assistant professor of English at the University of New Mexico in 1959 and taught there on and off until 1986.He then led the English department at Texas A&M University until 1989. [source]

Professor Smith’s books include ”Virgin Land: The American West as Symbol and Myth,” which won the Bancroft Prize in American History in 1951, ”Mark Twain: The Development of a Writer,” ”Mark Twain’s Fable of Progress” and ”Mark Twain, San Francisco Correspondent.” He was co-editor of the ”Mark Twain-William Dean Howells Letters.” [source]

Louis J. Budd was awarded the Charlie on May 30, 1992 at the American Literature Association’s third annual meeting in San Diego. Then Executive Director of the AHSA David E.E. Sloane, himself a graduate student of Professor Budd’s at Duke University in the 1960s, presented the award.

The citation of merit singled out Budd’s significant lifetime contribution to the study of American humor, his kindly and sympathetic teaching of students, and his gentlemanly treatment of colleagues. His citation also praised “his persistent widening of the range of discussion of humor through his analysis of social and political aspects of humor” (most clearly seen in his book Mark Twain: Social Philosopher in 1962) and of biographical and historical aspects in popular culture (as seen in Our Mark Twain: The Making of His Public Personality in 1983), among a vast array of works approaching humor, folklore, language, literary aesthetics, and Mark Twain studies. In these works, he “throws the light on the broadest social environment surrounding the making and social intentions of humor in America.”

In accepting the award, Professor Budd referred to his appreciation of the honor in special terms because of his own childhood memories of listening to the original live Chaplin radio shows and his long-standing appreciation of the goals of the AHSA.

Jack Rosenbalm was awarded the prized “Charlie” on December 29, 1992 at the MLA meeting in New York. He has served the AHSA in a number of capacities – as Managing Editor of Studies in American Humor (since its inception in 1976), Editor of Studies in American Humor, and Secretary-Treasurer of AHSA, spanning over two decades. Such a distinguished record of service stretching over much of Jack’s professional lifetime endows us with a special appreciation.  The AHSA named an award after Jack to honor his role in promoting humor studies scholarship.

M. Thomas Inge was one of the founding members of the American Humor Studies Association in 1974 and began its first newsletter with Larry Mintz, American Humor, An Interdisciplinary Newsletter, giving it its distinctly interdisciplinary flavor. He is widely known for his research in southwestern humor, Sut Lovingood, and Mark Twain, and for his wide-ranging, comprehensive, and thoughtful work on graphic humor and cartoons, which takes him frequently into the realm of popular culture studies and comic books. Recent books on Ollie Harrington have brought out the life of a superb African-American political cartoonist. Still in the bloom of his career as an American humor scholar, Tom Inge leads us by the example of his professionalism, his kindness and good humor, and his humanity – a model scholar in precept and example. Tom received his Charlie on May 30, 1996.

The Elizabeth Rosenthal Excellence Professor of English, Environmental & Sustainability Studies, and Women’s and Gender Studies at the University of North Carolina at Greensboro, Karen L. Kilcup is a past President of the American Humor Studies Association and a past editor of Studies in American Humor (1999-2004). Kilcup is the author of several dozen essays on American literature and the author or editor of eleven books, including two recent volumes: Over the River and Through the Wood: An Anthology of Nineteenth-Century American Children’s Poetry (Johns Hopkins, 2014, with Angela Sorby); and Fallen Forests: Emotion, Embodiment, and Ethics in American Women’s Environmental Writing, 1781-1924(Georgia, 2013), for which she received a National Endowment for the Humanities Fellowship.  Also past President of the Society for the Study of American Women Writers, she received a Distinguished Teacher award from the National Education Association and has taught at the high school level as well as at ten universities in the United States, Britain, and Switzerland. 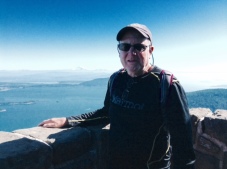 Ed Piacentino received his Charlie on April 2, 2016. Now a Professor of English Emeritus at High Point University in North Carolina, he currently serves on the Editorial Board of Studies in American Humor and has been both Associate Editor (2003-2008) and Editor (2008-2013) of the journal. He is the author or editor of eight books, including five on nineteenth-century southern frontier humor. They are: Southern Frontier Humor: New Approaches (2013), Southern Frontier Humor: An Anthology, co-edited with M. Thomas Inge (2010), C. M. Haile’s “Pardon Jones” Letters: Old Southwest Humor from Antebellum Louisiana (2009), The Enduring Legacy of Old Southwest Humor (2006), and The Humor of the Old South, co-edited with M. Thomas Inge (2001). His numerous essays in scholarly journals, book chapters, and reference book articles in American humor studies range from Old southwestern humor and humorists to Washington Irving, Nathaniel Hawthorne, and Poe to southern comic periodicals to northeast humor writer Mortimer Neal Thomson (“Doesticks”) to Mark Twain and his contemporaries to nineteenth-century political humor to the legacy of southwest humor to modern southern humorists and popular culture. His most recent essay is a chapter on Old Southwest Humor in Lorie Watkins Fulton’s forthcoming A Literary History of Mississippi. He has taught courses on American Humor, Southern Humor, and Mark Twain and the Roots of American Humor.

Judith Yaross Lee took courses on Mark Twain and American humor with Hamlin Hill at the University of Chicago and never looked back. Her yet-unpublished dissertation, To Amuse and Appall: Black Humor in American Fiction (1986), ran too ambitiously from Melville to Philip Roth, but taught tenacity in the ten-year process of finishing it after Ham decamped for New Mexico. She has since published five books–including the monographs Garrison Keillor: A Voice of America(1992), Defining New Yorker Humor (2000), and Twain’s Brand: Humor in Contemporary American Culture (2012)–as well as sixty essays, and four special journal issues, most notably the landmark triple issue of Studies in American Humor, Mad Magazine and Its Legacies (2014), co-edited with John Bird.  As editor of Studies in American Humor (2013-17), she built on her experiences as associate editor of The Markham Review (1978-89) and founding coeditor of Explorations in Media Ecology (2001-04).  Lee is Distinguished Professor of  Communication Studies, Charles E. Zumkehr Professor of Rhetoric & Public Culture, and Director of the Central Region Humanities Center at Ohio University, where she has taught since 1990; in 2016 she was Fulbright Senior Professor of American Culture at Leiden University in The Netherlands.  She received her Charlie Award on May 26, 2017.

Bruce Michelson  is Professor Emeritus at the University of Illinois.  He is the author of many books, including Printer’s Devil: Mark Twain and the American Publishing Revolution, Mark Twain on the Loose: A Comic Writer and the American Self, and Literary Wit. Bruce has written many articles and book chapters, including several installments of “The Year’s Work in American Humor.”  Bruce has been an active and supportive member of the AHSA and is a past president.  He has also been President of the Mark Twain Circle of America.  Bruce was awarded his Charlie Award on July 13, 2018 at the AHSA Conference in Chicago.

Linda Morris is Professor Emeritus at UC Davis.  She is the author of Gender Play in Mark Twain: Cross-Dressing and Gender Transgression, Women’s Humor in the Age of Gentility: The Life and Works of Frances Miriam Whitcher, Women Vernacular Humorists in Nineteenth-Century America: Ann Stephens, Frances Whitcher, and Marietta Holley.  She is the editor of American Women’s Humor: Critical Essays and the author of many articles and book chapters on humor, gender, and Mark Twain.  Linda was awarded her Charlie Award on July 13, 2018 at the AHSA Conference in Chicago.

Jan received her PhD from University of Nevada Las Vegas. She teaches Nineteenth-Century American, Mark Twain and Humor, and Native American Literature at Saint Louis University. She has published work on Twain, American Humor, and Teaching Humor. She is the past Executive Director of American Humor Studies.